Down to the River to Pray (Song)

Embed for Down to the River to Pray
recorded at St. Mary's Cathedral in Portland, Oregon
Angela Westhoff-Johnson, conductor
James Denman, recording producer
from the collection 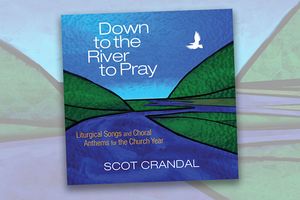 for SATB choir with optional accompaniment and congregational participation

An effective way of singing this simple setting is to start with the sopranos, then add a voice part with each verse. (When the tenors enter, the basses can sing the melody before singing the actual bass part on the next verse - you can hear this on the recording.)

"Down in the River to Pray" (also known as "Down to the River to Pray," "Down in the Valley to Pray," "The Good Old Way," and "Come, Let Us All Go Down") is a traditional American song variously described as a Christian folk hymn, an African-American spiritual, an Appalachian song, and a gospel song. It gained popularity in 2000 after Alison Krauss performed it for the soundtrack of the Coen Brothers film, O Brother, Where Art Thou?

The exact origin of the song is unknown. Research suggests that it was composed by an African-American slave.

The earliest known version of the song, titled "The Good Old Way," was published in Slave Songs of the United States in 1867. The song (#104) is credited to "Mr. G. H. Allan" of Nashville, Tennessee, who was likely the transcriber rather than the author.

In some versions, "in the river" is replaced by "to the river". The phrase "in the river" is significant, for two reasons. The more obvious reason is that the song has often been sung at outdoor baptisms (such as the full-immersion baptism depicted in O Brother, Where Art Thou?). Another reason is that many slave songs contained coded messages for escaping. When the slaves escaped, they would walk in the river because the water would cover their scent from the bounty-hunters' dogs. Similarly, the "starry crown" could refer to navigating their escape by the stars. And "Good Lord, show me the way" could be a prayer for God's guidance to find the escape route, commonly known as "the Underground Railroad."

Visitors to the National Museum of the American Indian in Washington D. C. have reported hearing a Hupa song played there which has the same melody as "Down in the River to Pray". It has also been suggested that certain features of the melody and phrasing are more typical of Native American music than gospel music or spirituals. 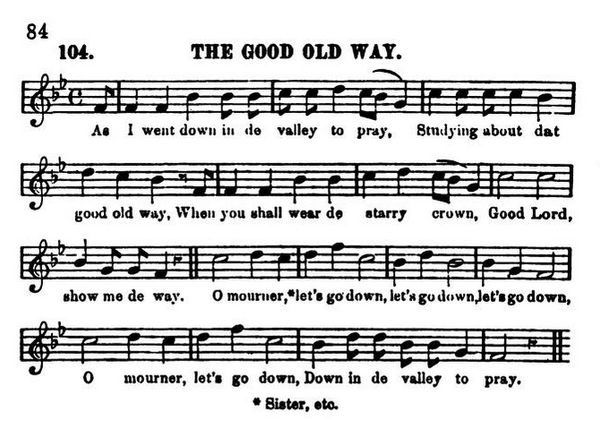 This is a screen shot of the sheet music for 'The Good Old Way' from 'Slave Songs of the United States', a book originally published in 1867, now in the public domain, and available online at archive.org 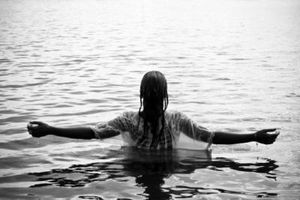